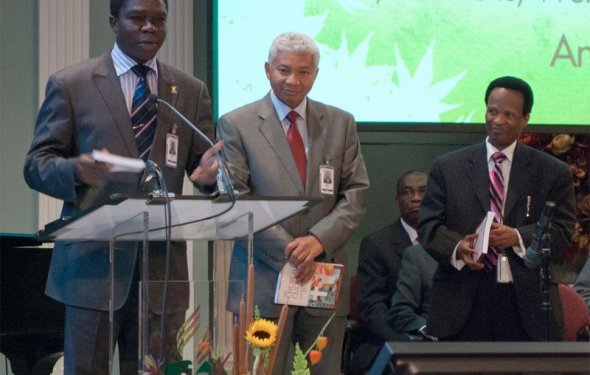 [Photo courtesy of the Adriatic Union]

Media centers in Croatia, Scandinavia and the United Kingdom are promoting health content as part of the Seventh-day Adventist Church's strategic plan for the next five years.

Christ-like healing is one of the six major priorities outlined within the strategic plan of the Seventh-day Adventist world church. Three media centers within the Trans-European Division are taking that health priority seriously with several new series of program being released this Easter.

In Croatia, the Church's fledgling online TV station, Glas Nade (TVGN) or Voice of Hope, began it broadcast of a brand new program, Life and Health, on Friday, 25 March. The station is a new initiative for the Adriatic Union, under the leadership of the Communication and Media director, Darko Kovačević. The team, which includes health expert, Dr. Diana Špoljar, is consciously endeavoring to generate programming that will touch the lives of the general population.

"Health is a very popular and wanted topic, gaining mass interest in Croatia, " Kovačević said, explaining that the program will include interesting facts in the area of health and medicine, simple health tips for viewers and physical exercise instruction led by one of Croatia's best known fitness trainers. Špoljar, a member of the Central Adventist church in Zagreb, and part of the emergency room team of the Dubrava hospital, is aiming at a primary audience that is outside of the Adventist church, but which, she says, will benefit Adventists who are interested in health topics.

Kovačević is also appealing directly to church members – both in Croatia and in the Croatian diaspora abroad, to share news of the program through their social media and with their friends. Viewers will equally be encouraged to ask questions via email or social media. TVGN includes a website( and a YouTube channel (Studio Glas nade).

The British Union Media Centre, (AMC-UK) is emphasizing holistic health in a new series, "Enhancing Health, " which will start to air on Revelation TV, an religious television channel, as well as on Hope TV-UK in the beginning of April.

In the program, BUC Health Ministries director, Sharon Platt-McDonald teams up with lifestyle doctor, Chidi Ngwaba, to talk about a variety of health issues such as stress and anxiety, mood and depression, energy, immunity, heart health and digestive health.

Ngwaba is already well known in the UK for his frequent health tips on National Breakfast TV and for extensive lectures throughout the country. Recently elected as Health Ministries director for the South England Conference, he also very clearly practices what he preaches – and is currently working to get all his fellow directors into shape.

In the six-part series Ngwaba uses his extensive training and wealth of experience to analyze and explain various lifestyle ailments in a way anyone can understand. He then suggests practical lifestyle changes that in some cases, over time, can reverse quite serious illnesses.

Each episode also includes dynamic, yet achievable exercise demonstrations by life coach and physical therapist, Joni Blackwood, and a bonus of delicious and nutritious recipes created by chef and nutritionist, Angelette Muller.

Kofi Osei-Owusu, the brains behind the show states that "the show has something to offer everyone, from children to the more advanced in years." He claims that it is already changing his lifestyle. The programs will air on Revelation TV, Thursdays at 8:30 pm, repeated Sundays at 1:00 pm. They will also be available on demand on Hope Channel UK, on the various Hope Channel platforms: Roku, Samsung Smart TV's and mobile apps, and on YouTube.

Finally, the supporting ministry of LifeStyle TV (Sweden), working in cooperation with the Scandinavian Unions, highlights both physical and emotional health in its latest magazine, LifeStyleVIEW. This includes an interview with Huldah Karlsson, an ambitious young person who shares her struggle with depression and helpful lessons she has learnt. Dr Per de Lange is also presenting a refreshingly revamped TV show for LifeStyle & Norwegian Hope Channel, "Livsretning" (Life Directions). The aim is to help viewers deal with issues such as feelings, relationships, self-image, love, and the meaning of life.

Physical health is also on the menu focusing on issues such as WHO recommendations on processed meat, handy tips on exercise, and some tasty recipes. The magazine, which is published four times a year in Swedish and Norwegian, and provides a positive connection to the many viewers of LifeStyle TV. [tedNEWS]

Source: news.adventist.org
Related Posts
Categories
Latest Stories
DIRECTV Consumer Reviews My concern with DirecTV were the costs which kept appearing in my bill...
DirecTV provider Enjoy HD DVR service in every room, with just one HD DVR. Genie®, only...
Can you get Internet through Dish? Navigation On most devices, Netflix lets you browse through rows of movies...
DIRECTV Play One of the easiest ways to get a value double play package these days is...
Watch satellite channels online Second, if you live somewhat close to a broadcast tower, you can still...
Latest tweets
Tweets about #CABLETV